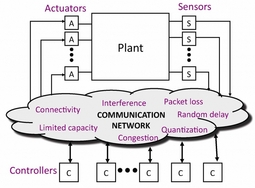 Wireless Networked Control Systems (WNCS) are spatially distributed systems in which the communication between sensors, actuators and controllers occurs through a shared wireless medium. WNCS are increasingly deployed to monitor and control Cyber-Physical Systems such as mobile sensor networks, industrial control systems and smart grid due to many benefits such as ease of installation and maintenance, low complexity and cost, and large flexibility. Building a WNCS however is very challenging since the strict timing and reliability requirements of control systems should be met by the wireless communication systems that introduce non-zero packet error probability and non-zero delay at all times. In this project, our goal is to study the joint optimization of the communication and controller systems to provide maximum robustness and minimize network energy consumption while satisfying a certain controller performance.

Machine-to-machine (M2M) communications are expected to provide ubiquitous connectivity between machines without the need of human intervention. With the rapid development of the third generation long-term evolution (LTE) cellular networks and its advancement (LTE-Advanced), M2M communications via LTE-Advanced cellular networks with widespread coverage is expected to constitute a significant part of the Internet of Things. For mobile service operators, services through M2M communications have promising and strategic values. For instance, operators can expand their end-to-end information solutions into industries beyond the currently supported by exploiting the different characteristics of M2M services such as little bandwidth usage with minimal impact on the capacity of radio access networks. In this project, our goal is to design M2M communications to maximize the energy efficiency while providing the robustness of the transmissions and study energy efficient resource allocation algorithms for M2M communications by quantifying their utility when utilized together with human-to-human (H2H) communications in LTE advanced cellular networks. 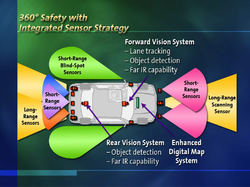 As the number of powerful electronic control units (ECU) and associated distributed sensor and actuator components inside the car keep increasing every year, the manufacturing and installation of wiring harnesses for transmission of data and power for all these components require considerable engineering effort. Eliminating, or greatly reducing, the wires in the harness can potentially provide part cost savings, assembly and maintenance savings, and fuel efficiency due to decreased weight. Moreover, wireless sensing would enable new sensor technologies to be integrated into vehicles (e.g. Tire Pressure Monitoring Systems, Intelligent Tire), which would otherwise be impossible using wired means. The objective of this project is to design the physical (PHY) layer and medium access control (MAC) layer of the communication protocol for intra-vehicular wireless sensor networks. 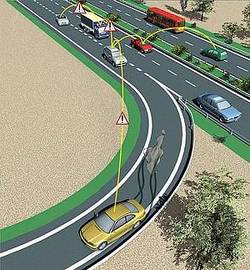 Inter-vehicle communication (IVC) networks are expected to significantly improve the safety of our transportation systems by making information available beyond the driver’s knowledge. Driver behavior, constraints on mobility and high speeds create unique characteristics such as rapid but somewhat predictable topology changes and frequent fragmentation. The objective of this project is to develop a cross-layer design for IVC networks taking into account the parameters of all layers from physical to transport layer and using epidemic algorithms to deal with dynamic topology changes. In contrast to prior studies that either provide analytical results for cross-layer interactions without any communication protocol design or perform cross-layer design considering only a limited subset of cross-layer parameters, our key contribution will be integrating functionalities of all layers from physical to transport into a cross-layer protocol. As an integral part of the project, we aim to create realistic models for the topology of IVC networks based on realistic vehicle mobility models and channel measurement results. That would facilitate to both understand the topology characteristics of IVC networks and create a more realistic simulation environment for the testing of network protocols. 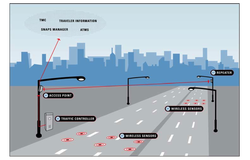 Wireless magnetic sensor networks offer an attractive, low-cost alternative to inductive loops, video and radar for traffic surveillance on freeways, at intersections and in parking lots. Vehicles are detected by measuring the change in the Earth magnetic field caused by the presence of a vehicle near the sensor. Two sensor nodes placed a few feet apart can estimate speed.  A vehicle magnetic signature can be processed for classification and re-identification. The goal of this project is to deploy wireless magnetic sensor networks at an intersection in Istanbul, implement algorithms for vehicle detection, speed estimation, vehicle classification and re-identification, and use these results to estimate the performance of a freeway and intersection such as deciding the safety level of an intersection or estimating travel time during peak hours. 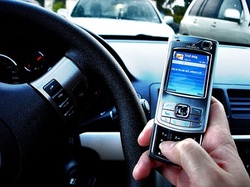 The applications of accurate positioning of a moving vehicle or object along a route are immense: travel time estimation in transportation, predicting the arrival time of buses to each stop, location dependent targeted advertisements, determining the movement pattern of people in urban sociology. Currently, a solution to this problem relies on using Global Positioning System (GPS) enabled mobile phones and devices. A solution that does not require GPS on the other hand would be more power efficient and scalable. Recent work has suggested using information already being measured by mobile phones in the course of their normal operation such as Received Signal Strength Indicator (RSSI).  Unfortunately, the accuracy of such approaches has been poor. The objective of this project is to improve the accuracy of RSSI based localization by incorporating the constraint that motion of vehicles and other objects satisfy route constraints.